The Priscilla MacBean is important as she was the first motor lifeboat to be launched off of a beach designed and built for motor and ‘sail and oars’.
Built in 1921 at J Samuel Whites in Cowes she was originally intended for service at Eastbourne and on more than one occasion launched on service in conjunction with the Hastings Lifeboat. The boat is of a style and era of the Mary Stamford lost in Rye Bay in 1928 which was a pulling and sailing lifeboat without a motor.  However she was not considered suitable for the English Channel and in 1928 she was moved to Kirkcudbright in Scotland to cover the area of the Solway Firth. A few years later she was moved across the Solway Firth to Maryport in Cumbria to continue her service in saving life and finally was retired from RNLI service in 1934.

We recently received this letter from a Kirkcudbright resident
“This is a wonderful story and thanks to Messrs White and Hamilton and those volunteers from Hastings for their magnificent restoration work.
I am a resident of Kirkcudbright and both my family and I have been associated with the Kirkcudbright Lifeboat for over 100 years. I often wondered what happened to Priscilla MacBean, our 5th lifeboat, after it went to Maryport in 1931. It is good to know she is in safe and caring hands.
To bring Priscilla MacBean to Kirkcudbright from Maryport in Feb1928 was no easy task. On Thursday 1st Mar 1928 the crew rowed the retiring boat across the Solway to Maryport. It took 16 hours in that old pulling and sailing craft. After a night’s rest they brought Priscilla MacBean back to Kirkcudbright in 3 hours. She was our first powered lifeboat.

She served 3 years as Kirkcudbright Lifeboat. She was replaced by the Morison Watson. The crew on that first voyage to Kirkcudbright were Coxswain George Parkhill, Bowman ex Provost W.MacKenzie, Artist William Robson and John (Hubby) Poland.”
Her history after that is somewhat chequered but she is known to have been used in France for leisure for two years then brought back to England where she operated as a pleasure boat on Lake Windermere. After some years as a houseboat she was bought by someone in Eastbourne with a view to operating her as a pleasure boat in the English Channel off Eastbourne but sadly this idea did not get off the ground.

In 2013 Old Towner ‘D-Day White’ spotted the hull of the old lifeboat laying in a field in Hailsham Sussex, he was intrigued and when he discovered it was to be left to rot was determined to recover the boat if at all possible. Together with Tush Hamilton they purchased the hulk were she was then moved to the East Hastings Sea Angling Association for her restoration to begin.

The project team were intent on restoring the historic lifeboat to a condition where she could be placed in a prominent part of Hastings Old Town.

Along the coast of the British Isles there are several old lifeboats on view to the public but none in Sussex. Experience elsewhere shows that these boats encourage people to view them and there are commercial advantages to having such a boat on display in a coastal town.
Hastings is the first town in Sussex to have an historic lifeboat on display and she will remain as a lasting legacy to the history of Hastings Old Town and its lifeboat men. In addition it will be a permanent reminder of the risks taken by our men and women who crew the lifeboats and as a further tribute to those men of Rye Harbour and elsewhere along the coast who tragically lost their lives in attempting to save others. In the past crew have come from the fishing industry but the lifeboat now has a more diverse make up of crew members.”

Restoration
Once Priscilla was moved to Hastings restoration got underway.
The January storms of 2014 were pretty gruesome, but saying that it didn’t deter Tush Hamilton and his band of volunteers from having the odd half day working on her, managing to patch up the port side hole and make secure. The floor joists were fitted and a volunteer carpenter fitted the deck.

Once the rough winter weather subsided and spring arrived Priscilla soon emerged from a greying and battered looking ugly duckling into a beautiful white swan. Once the summer months arrived there was no stopping the volunteers, from her woodwork to her paint work Priscilla finally emerged as beautiful as the day she was originally finished in 1921.

Priscilla’s New Home
It was decided and agreed that Priscilla’s new home was to be sandwiched on the A259 between Old London Road and Harold Road on the left hand side just as you get to the bottom of two very long, house lined roads, and half a mile before the current lifeboat Station on the seafront.
Ground works soon started at the site on the Bourne & the first concrete pour took place during May with the final landscaping shortly afterwards.

Volunteering & Fund raising
the restoration of the Priscilla MacBean couldn’t have taken place without the financial generosity of the kind individuals and local business who donated money to the restoration fund, not to forget the special events that took place during the summer months. All of her restoration work was done by volunteers

On Saturday 3rd May 2014 with kind permission from Michael Lee of Flamingo Park, an area was devoted for a fund raising event for “The Priscilla MacBean Restoration Fund”.
The weather was kind. One of our local bands “Loose Ends” came to entertain and give us their support, thank you Phil, Phil, Frank & Mark.

John & Pat Hamilton fed the hungry masses with fish rolls in the form of Tush & Pats Famous Fisherman’s Rolls. We had Janet Martins raffle, the hoop-la stall, splat the rat and a cart full of goodies & tools supplied by Parker Building Supplies. Surrounded by Morris Dancers, Jack in the green dancers made the event a wonderful success, with even the miniature railway on its way past the Priscilla Mac bean, stopping with all its passengers making a donation of some quantity. This all took place under the watchful eyes of Les & Nicola from EHSAA, whose good friend Dave turned up with his beautiful steam engine boat named The Little Lamb, looking pretty as a picture.
With a spectacular & colourful display of bunting flags , bells ringing & sticks clacking enhanced by the smell of Tush`s Hastings Caught fish &The Mayor, Cllr Allan Roberts’s collecting pot being emptied a total of just over £400.
On the last day of Carnival Week during August she was moved onto the Stade Open Space where our local winkle club band “Loose Ends” raised over £200 for more renovation work.

Moving day parade
As scheduled On Saturday 15th November 2014 Priscilla MacBean was moved to her new home and final resting place. She was blessed by father Featherstone and a minutes silence took place to remember the crew and lives lost in Rye 1928. Priscillla was marshalled by Bud White, whilst being hauled through Hastings old town by Fire crews and the Hastings Bonfire Society and trowed on plastics by a team of members from the East Hastings Sea Angling Association. A Single bell tolled ringing out an eerie sound as she went up the road mixed in by sea shanty singing along the way.

Once Priscilla arrived at her resting place she was then lifted into place by Cousins Crane Hire. Once she finally touched down the bells started ringing to celebrate her arrival to her new home. Hundreds of local people and visitors turned out to show their support of the Priscilla MacBean, a day in Hastings History that will be remembered for many years to come. 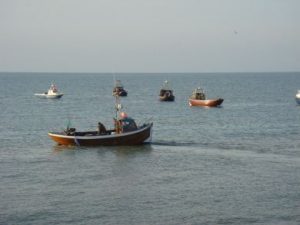 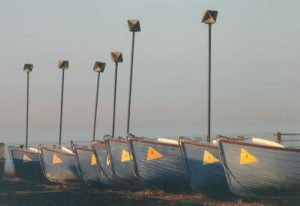